Since Blogger hates me and doesn't want to post, here is the abridged version. (Which is still pretty long, so hang on tight!!)
Friday night I got lazy and didn't make pizza. Instead I made a quick pesto pasta, had a small portion of steak and called it a night. I had everything ready for my 4:30 AM wake-up call.

Race Day: I woke up before my alarm even went off. I lay in bed for about 10 minutes then got up to get ready. I ate 1/2 bagel with PB and 1/2 a banana. I had some coffee. I visited the ladies room. I had 4 GU's and 2 Sport Beans tucked into my back pocket of my tank. I was good to go.

I did have one worry, however. I had my period. (Thanks Mother Nature!) But it was on its last legs so I was hoping it wouldn't be an issue. Of course, I only had one tampon left for the day and I had forgotten to pick any up at the store...so just to err on the safe side I was planning on popping into a grocery store for some Pearl Mini's I could hide somewhere on me during the race . If only I could get my family out of the house in time....we were supposed to leave no later than 6 AM for the race start at 7 AM.

5:31 AM: Younger bro Eric is still asleep on the couch. I start screaming at him to get up. Eventually he did. Then to my horror, I HEAR HIM TAKING A SHOWER. Luckily for him he is a boy and that takes about 2.5 seconds.

5:47 AM: I am not-so-patiently waiting at the door for everyone to leave. I was regretting not driving myself. (To clarify, Matt and my Nana were perfectly ready to go.)

5:51 AM: We start loading into Matt's truck, as we (Matt, me and my Nana) were under the impression we were all riding together. Doors are open and front seat + one in the back is emtpy for Eric and Dad.

5:55 AM: I sit with my mouth open in utter disbelief when I see Dad and Eric pull out of his complex's parking lot in Eric's car, turn the corner, and are out of sight while we all sit there wondering what the hell just happened.

5:56 AM: As we scramble to move spots and shut the doors and screech out of the lot Fast and Furious style, I scream into my cell phone at my dad, "Whereareyougoingithoughtwewereridingtogetherimgoingtomissmyraceidontknowtheway!!"

5:57 AM: Mini-heart attack averted. We leave, and are following them (I dont know the way).

5:58 AM: We pass the Food Lion I had previously instructed them to stop at. I make another frantic call. "Okneverminddontstopnoooootimeee!!" and then "OHwaitstopatthisgasstation!!" So we did. I hopped out and picked up the cheap Tampax Super's in the paper wrapper. Will have to do in a pinch. I stick one in the back of my tank along with my GU's. Yes, it was sticking out and was very noticable.

5:59 AM - 6:34 AM: "OMGGGG this is not the right waaayy! Ithinkdadhasuslost omg he betternotbetakingthescenicroute!!!!!" (My dad is known world wide for taking the long way every where. Once it took us an entire day to drive from my Nana's house in VA back to his house. It normally takes three hours.) Also I was debating whether I should wear my hat (that came in the race packet) in case it rained, or my cute new green headband. The hat won.

6:35 AM: We arrive in High Point with plenty of time to spare, we find the starting line, and my family drops me off to go park and wishes me good luck. I was at this point, calmed down.
We also took some pics. 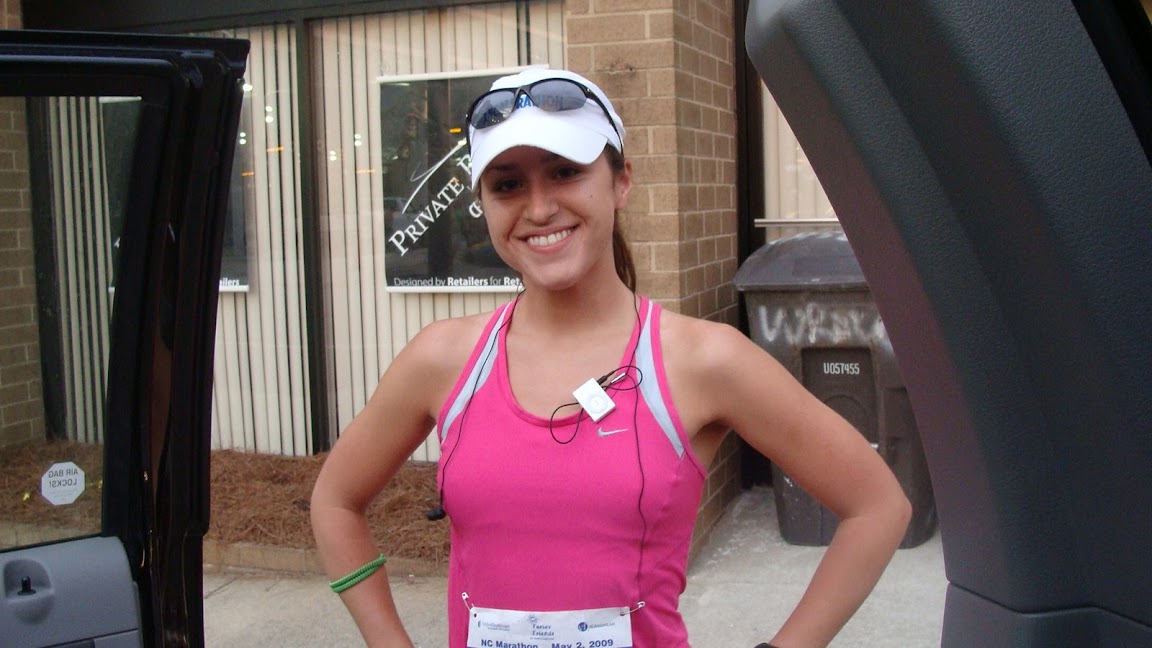 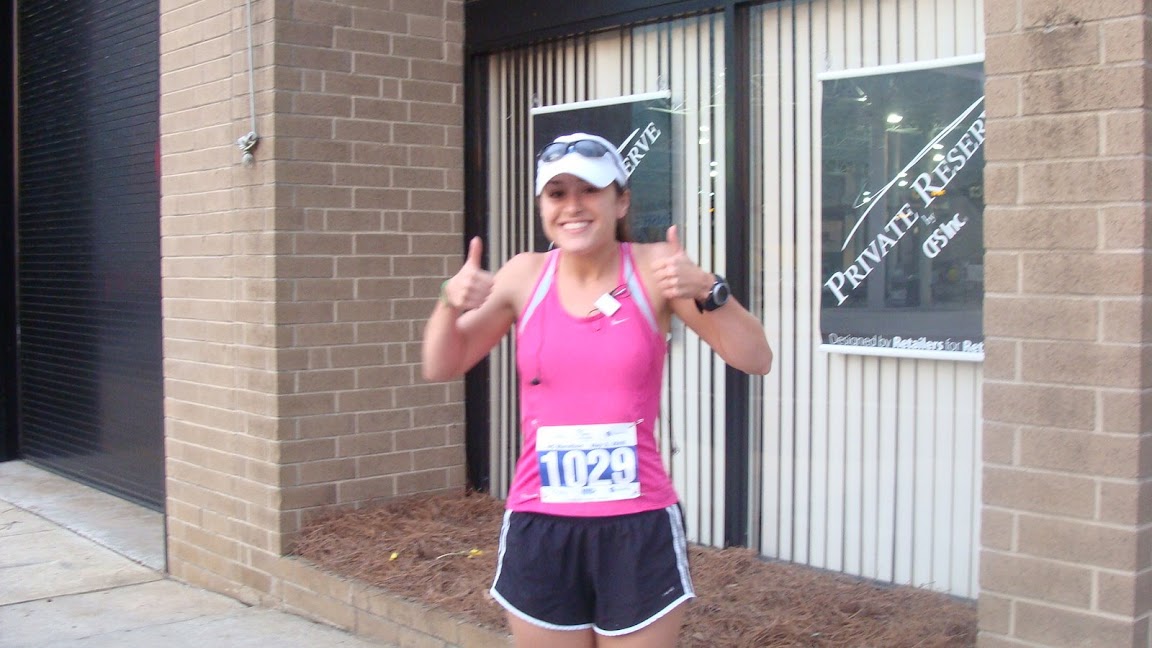 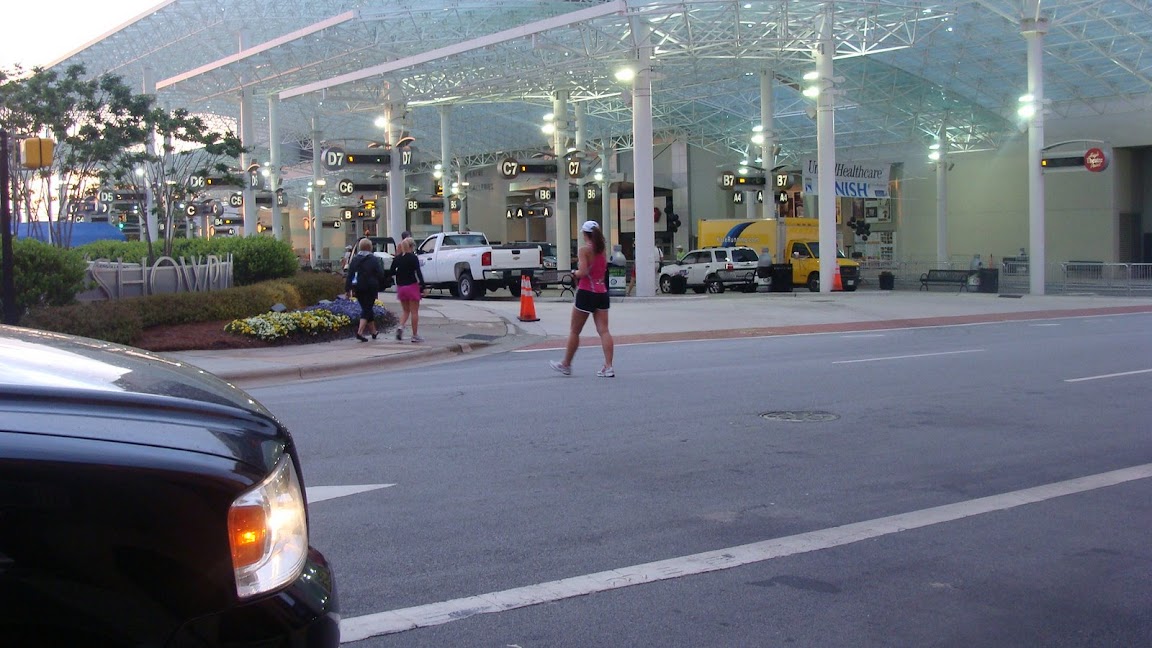 6:40 AM: I have to pee. I find the port-a-potties only to scowl at the ridiculously long lines. I mumble something about "crappyorganizing" and "idontwaitinlines" and "bushsomewhere." I get some strange looks and an awkward chuckle and scramble a block or so away to pee behind a building. I also start eating a pack of Sport Beans. But not at the same time. 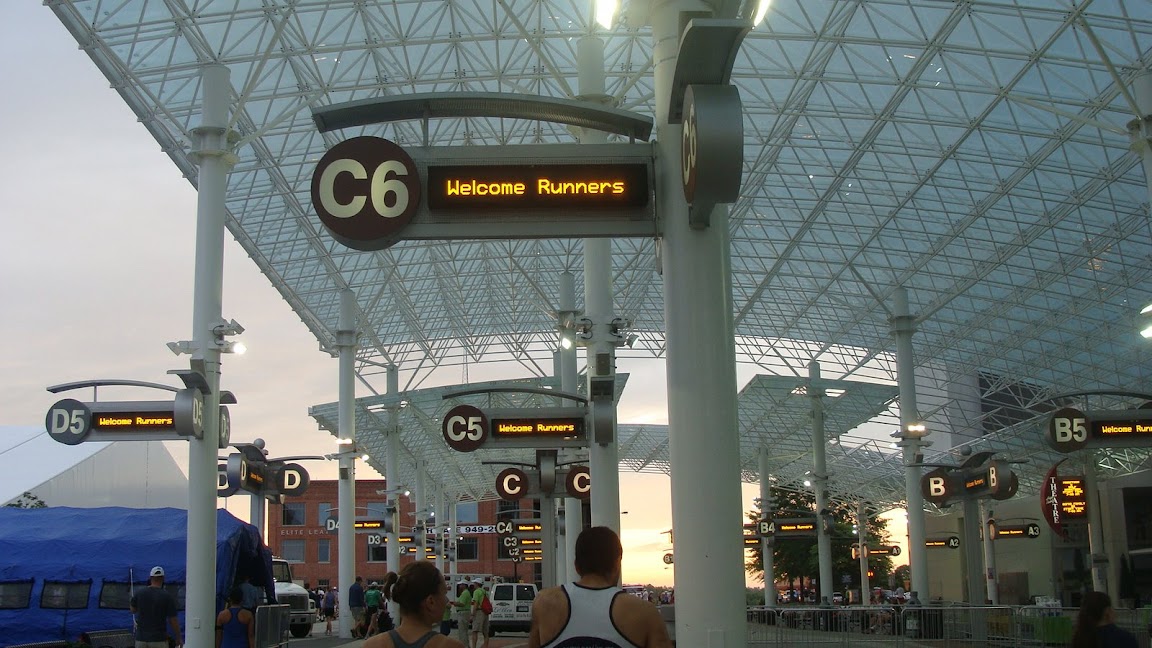 6:43 - 7:02 AM: I'm looking around for the starting line (it was not very clearly marked) and see Matt and crew through the (minimal) crowd. I was thinking that this race is way too small for me to find my posse that easily about 5 ft from the starting line. 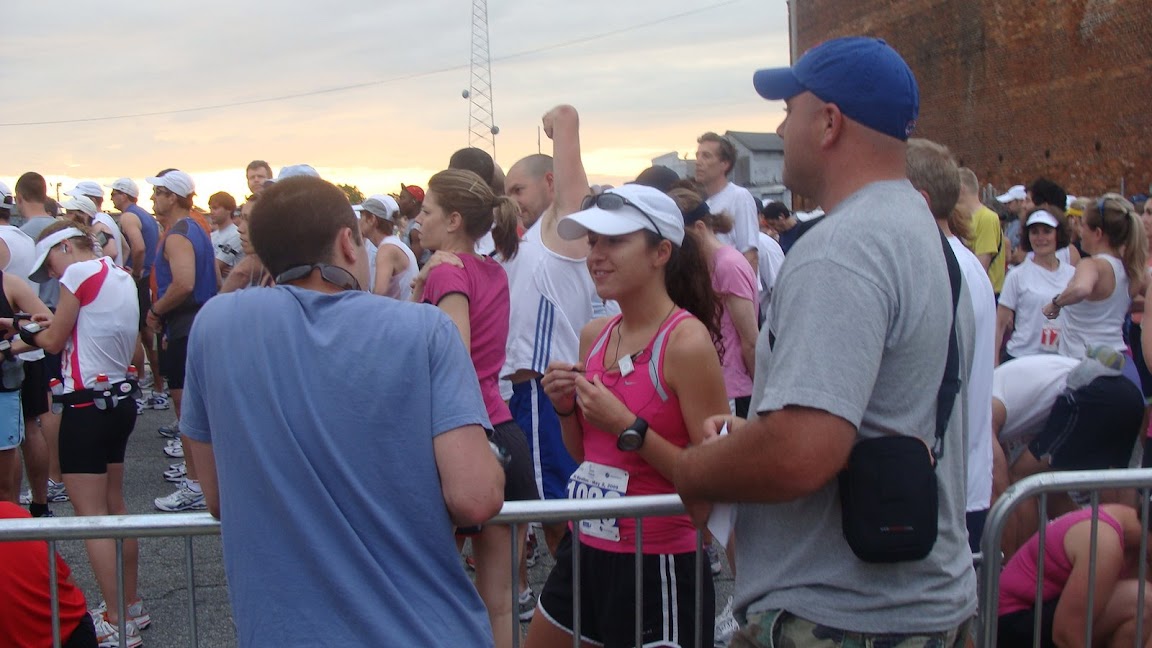 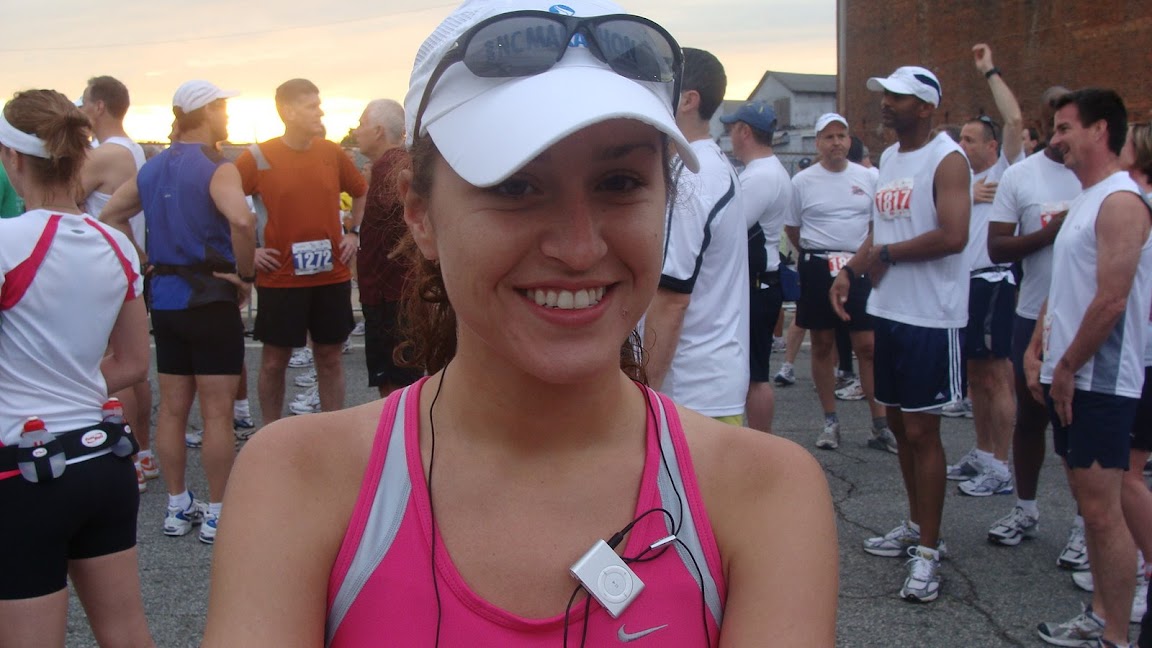 We make small talk, listen to the national anthem, take some more pics, I give Eric the rest of my Sport Beans and my other pack and happily let him and Matt know that "I peed behind a building and now I feel like I need to poo again." Eric takes the Sport Beans. Matt laughs and looks genuinely worried. I tell him that it's ok "they have port-a-potties on the course should the urge strike." 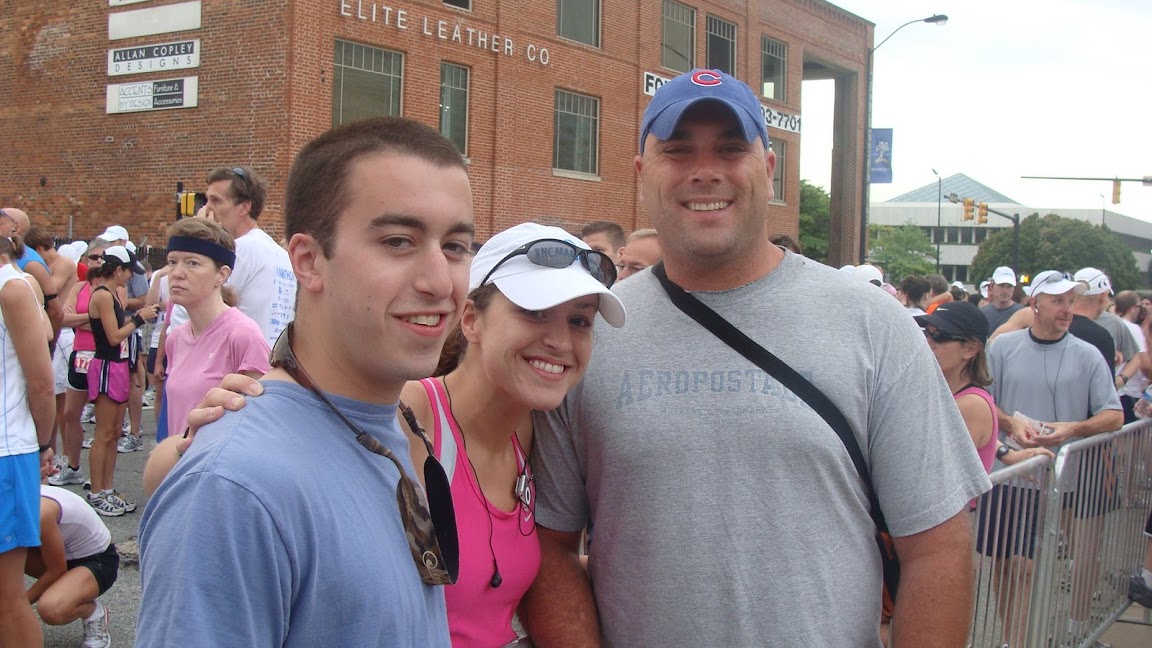 Then I look at my Garmin and realize it's go time. I set that baby up, put on my headphones (the most awesome headphones ever, review to come this week) and I'm off!

The Race: Miles 1-4
The weather at the starting time was 62 degrees F, 80% humidity with a south wind of 6 mph. Although it sounds really humid, I didn't notice it at all. At points throughout the run it was gently spitting rain to cool us off. Mother Nature was trying to make nice. The weather was perfect.

The first four miles wound through downtown, some historic neighborhoods with huge houses with expensive cars parked out front, and then back into the downtown area. There was a group of three sort of overweight women all dressed alike who were running for a few minutes and then walking. This thoroughly pissed me off because although they seemed to be walking most of the time, they were keeping up with me perfectly. Hmm. I consoled myself with the thought that they were probably running the 1/2. Since they stayed with me until the two races parted at 8 miles, I found out that they were indeed running the 1/2. That didn't really make me feel better.

It was hillier than I had expected/hoped but I was feeling strong. I rounded out the end of mile 3 and was pleased to see my crew waiting for me at a corner, screaming my name, waving cameras. Matt was so graciously carrying around my mom's huge camera we were borrowing since mine was broken.

My dad hopped in to run along side me for a minute and asked how I was doing. I told him it was pretty hilly and he assured me I was doing great. Even my brother looked happy! This was a shocker.

The Race: Miles 5 -13
Eventually the course moved towards the major roads and was heading out of town. At around mile 8 the two races split and a (very) few of us went to the right towards the "MARATHON" sign. I teared up because I was so proud of myself because I was going to finish a marathon! Then I shocked myself back into reality and realized it was only mile 8 and I had a crap ton left.

Mile 10 started us winding through the country. I was almost alone on the course with only a handful of runners ahead of me (I tried not to look behind me to see who was most likely about to pass me), miles of farm land, a few tractors and a good number of moo cows. I was lonely. It was desolate and not that pretty. Up until this point, I had been keeping within my target pace. My left foot was starting to really hurt and I could feel a nasty blister on my pinkie toe forming. There were NO spectators cheering me on.

I took my first walk break at mile 13.5 for about 30 seconds. It was at the bottom of a pretty long hill. I was bored, so I walked. It was my first big mistake of the race. 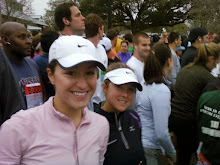 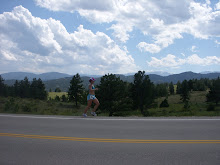 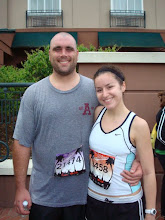 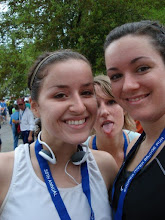